Up Hatherley is first mentioned in a record dated 1018 which shows that it was a manor in its own right. In that year the Abbey of St. Peter’s in Gloucester sold Badgeworth and Up Hatherley to a Saxon chieftain in order to raise funds to pay its share of the Danegelt (a tax paid to the Viking raiders to save a land being ravaged).

In the 13th century Gilbert de Clare, former Regent of England and Marcher baron, owned extensive areas of land, including lands at Badgeworth, Up Hatherley and Shurdington. In 1312 he bequeathed these land holdings to the Priory of Usk, a small convent of Benedictine nuns, founded in 1160 by Richard de Clare.

In 1291 church taxation records refer to the church at Badgeworth and a chapelry at Up Hatherley. Just over two centuries later, in 1535, a valuation of church property undertaken by Henry VIII confirms a chapel existed in Up Hatherley.

It is at this point that Up Hatherley seems to lose its church/chapel (site unknown). However in 1536 Henry VIII appropriated and sold most of the religious houses. So it is quite possible that the church may have been either abandoned or destroyed (taken for stone), but whatever fate it met, thereafter the few inhabitants of Up Hatherley walked on footpaths across the fields to the ‘Hatherley Aisle’ (north aisle) of St.Paul’s Church, Shurdington.
The first Shurdington Parish register contains entries of baptisms and burials of Hatherley residents from 1559 onwards. This continued until Mrs Gretton (of Coney Gree, a fine house in 3 acres of estate land, which stood on the corner of Hatherley Road and Coombe Glen Lane, demolished in 1962) built the present Sts. Philip and James’ Church in 1886.
At the time of the consecration of the new church it was recorded in the local newspaper that Up Hatherley’s original church had been destroyed in 1640, although it is more likely that the Dissolution of the monasteries a hundred years earlier was the cause of the loss and the chapel possibly then adapted for agricultural use, or falling into gradual decay.

The last two records mentioning the chapel at Up Hatherley are in 1536 when Henry VIII’s chief minister, Thomas Cromwell, carried out a valuation of religious buildings. In this documentation rents from “Badgeworth, Hadderley et Down Hadderley …” are listed. A further line refers to “pfitte (profit?) comyngout of the p’she churches of Badgeworth, Hadderley and a chapel thereto annexed ….”.

Almost 10 years later in 1545 the crown sold the title of the above lands to James Gunter, a gentleman, and William Lewis, a yeoman. A grant dated that year mentions “the farm and the chapels of Uphatherley and South Hatherley with tythes of sheaves and hay, glebe lands …”. Thereafter there is no further mention of the chapel.

The most likely site for the old church would be in the vicinity of Manor Farm, as many medieval churches were situated within the grounds of manor farms. The surviving Manor farmhouse, now a Grade II Listed building, is dated 1769 . It is most likely that the current Manor Farm buildings will be on, or near, the site of a previous (possibly moated) medieval manor house. Indeed some of the old field names reveal this history, for example ‘Moatmead’ and ‘Churchyard’. The latter was a small field of two acres mentioned twice in deeds of conveyance in 1702 and 1715.

Evidence for a church was sought in a limited, small scale, trial archeaological excavation in 1985, when Up Hatherley Way and the cul-de-sac of Manor Park were being laid out. Interestingly during the preliminary survey of this ‘mound and ditch’ site in one of the farm’s orchards, 4 fishponds and a leat (water channel) were recorded. A ditch, several areas of cobbling and a line of large, regularly shaped limestone blocks, measuring 3.4 metres long were also discovered. However it was concluded that there was no evidence of the church.
This excavation covered an area of only 134 square metres and therefore does not rule out the possibility of an old church site existing. With the proposed development of the surviving 3 acres of the Manor Farm area currently arising, opportunities will be forthcoming for further careful investigation.

During the reign of Elizabeth I, in a Letter Patent dated 1574, Up Hatherley lands, including Manor Farm, passed into the ownership of Richard Pate (Recorder of Gloucester), who used part of his rents from Up Hatherley to fund his charitable foundations in Cheltenham, which included the establishment of a grammar school and an almshouse. Manor Farm was liable for a payment of 12 shillings annually, and this sum was still paid regularly right up until recent times.

In 1853 Manor Farm (then called Up Hatherley Farm) was purchased by a wealthy gentleman named Thomas Pickernell (senior). He had moved from Worcestershire to Cheltenham to enable his son, Thomas (junior), to attend the recently opened Cheltenham College. Thomas Pickernell junior became a three times winner of the Grand National (in 1862, 1873 and 1875), eventually returning to live back at Manor Farm with his elderly father.

Another former resident whose name is better known is Brian Jones (1942 – 1969), musician and founder of the Rolling Stones.

Origin of the Name

Up Hatherley’s name has changed many times as shown in the following records.

In 1022 it was called Hegberleo (from Anglo Saxon meaning ‘Heathen burial ground’ or ‘Burial ground by the hedge’).
In 1086 it was listed as Athelai in the Doomsday Book.
In 1221 it was called Hetherleg Prioris (when it was one of the manors held by the Priory of Usk).
In 1287 it was Uphatherleye (the closest to its current name).
In 1521 it became Hatheleya Superiore.
In 1536 it is referred to as Hadderley.
In 1545 it is again called Uphatherley.

Up Hatherley was formerly a hamlet in the parish of Shurdington, with just a few buildings, mainly farms, including Greatfield Farm (now the farm shop), Brickhouse Farm (in Chargrove Lane), South Farm (now South Park), West Farm (now West Lodge), Up Hatherley Farm, with Manor Farm at its historic core.
In 1887 Up Hatherley became a parish in its own right.

From 1960 onwards much of the farmland was converted into estate suburbs to house Cheltenhams rapidly expanding population, and in 1991 Up Hatherley was taken into the Borough of Cheltenham, whereupon the parish transferred all its remaining fields (which extended as far as the boundary of the churchyard of Shurdington church) into an enlarged Shurdington parish, so that Up Hatherley parish now ends at Up Hatherley Way and the former bounds are no longer beaten.

The first Parish Meeting of Up Hatherley was held on the 2nd August 1944, and was chaired by Mr. H.W. Hicks. Parish Meetings were held once every year

In 1949 a parish council was constituted to serve its needs under Cheltenham Rural District Council. In the 1970’s Up Hatherley became part of the newly formed Borough of Tewkesbury until it was absorbed into Cheltenham in 1991.

All Parish Council records have been kept and the earlier ones are held in Gloucestershire Archives.

Mary Nelson, indebted to the research of Eric Williams 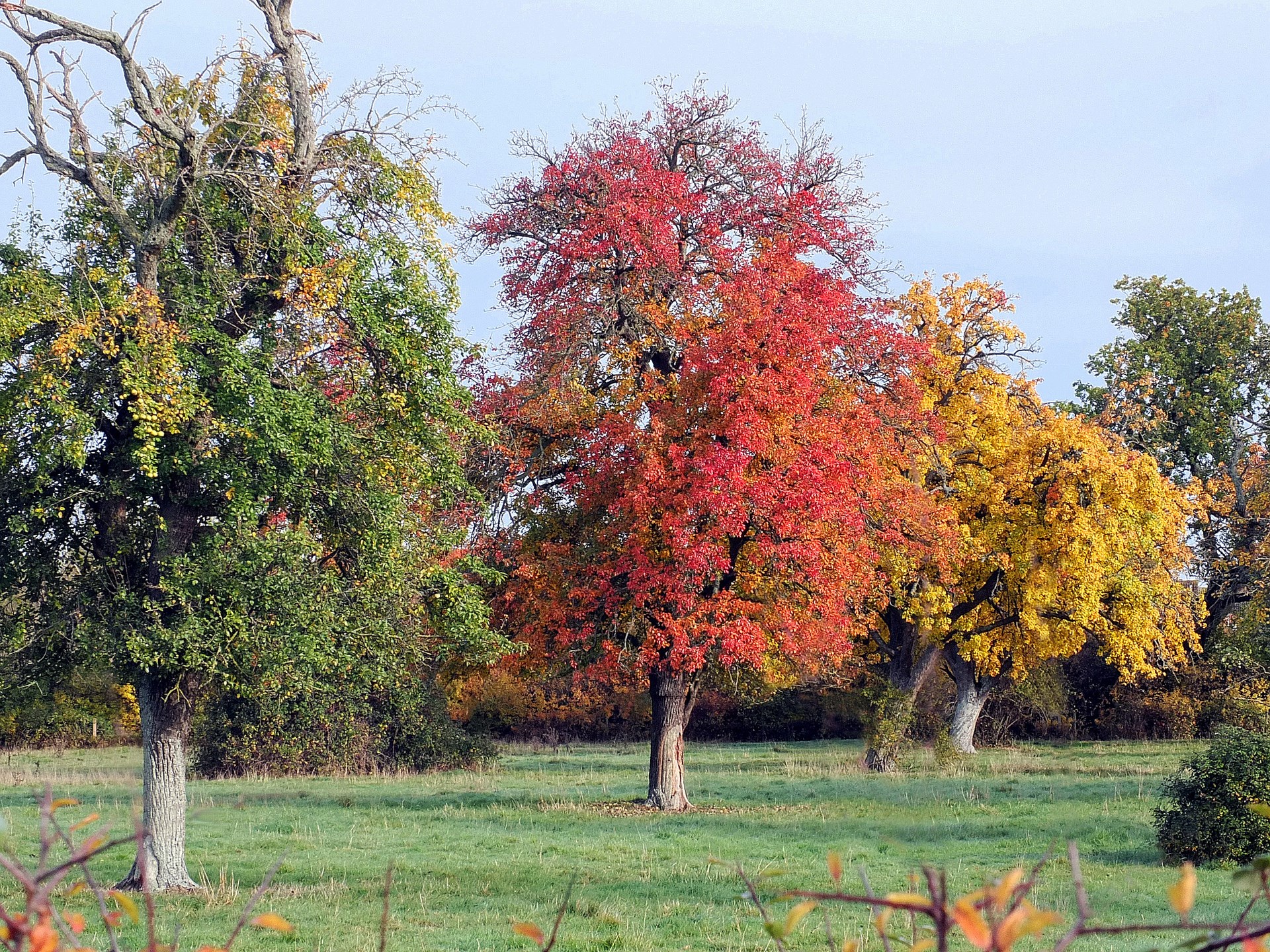